Danish architectural firm BIG is currently overseeing the construction of a massive urban pyramid on West 57th between 11th and 12th Ave in Hells Kitchen.

The concept for the mixed-use pyramid was created by developer Douglass Durst of Durst Fetner Residential.

Durst Fetner Residential has chosen Danish architectural firm BIG-Bjarke Ingels Group to design West 57th, a 600-unit residential building on West 57th Street between 11th and 12th avenues, BIG's inaugural North American project. The building will be a hybrid design blending the European block look with a traditional Manhattan high-rise courtyard building. Residential units of different scales will be located on a podium with cultural and commercial space. The building, which has a sloping roof, is also seeking LEED Gold certification. When viewed from the West Side Highway, the building appears to resemble a warped pyramid, while it looks like a slender spire when seen from West 58th Street, according to BIG.

An ETA hasn't been announced, but the internal steel structure of the pyramid has been built, so it shouldn't be more than a couple of years before we see it completed. 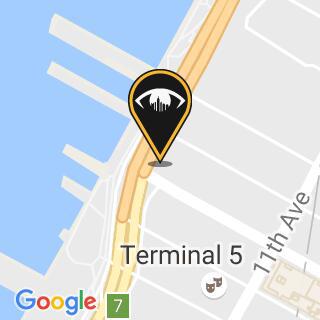 [WATCH] In the Street: Vintage Silent Film From 1948 Shot in East Harlem

Check Out These Minimalist Maps of Brooklyn's Major Street Intersections