Red Hook is the neighborhood on the western edge of Brooklyn that is bounded by the Buttermilk Channel, the Gowanus Canal, and the Brooklyn Queens Expressway. It is one of the oldest settled areas in the Borough, established around 1636 as a Dutch shipping town called Roode Hoek, translating into "Red Point", named after the red clay soil and geographic "point" features of the original coastline.

The neighborhood has almost always been a hub for shipping and industrial businesses. The closest subway station is the F at Carrol Gardens and Smith-9th Street Station, yet both are at least a 10-15 minute walk from most parts of neighborhood. When the BQE was built in 1961, it further isolated Red Hook by providing a visual "wall" between it and the surrounding neighborhoods. During the 1970s and 1980s, when the entire City was filled with crime, Red Hook was one of the worst neighborhoods in New York. It was one of the last to get cleaned up, with LIFE magazine rating it as one of the worst in the United States, and the "crack capital of America."

Fast forward to today, and Red Hook is on the rebound. With the introduction of service from both the Ikea Ferry and the official NYC Ferry, and Citi Bike bringing a public bike share, the neighborhood is getting more and more accessible every day. Businesses are popping up on local streets, there is a thriving food truck scene, and proposals for mega-projects that would completely rejuvenate the neighborhood.

In this short video from our Above New York series captured on a recent hazy summer day, see the old Brooklyn neighborhood of Red Hook from above, from all angles. 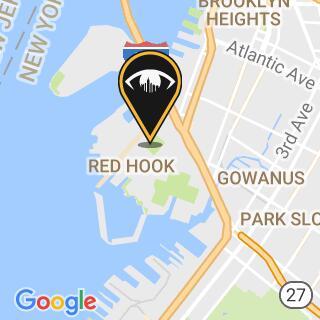