San Nakji is an authentic Korean seafood dish in which live octopus is seasoned and served while still moving. Located in Woodside, Queens, Korean restaurant Sik Gaek is one of the only places in New York City to try it. In this video from Eater's K-Town series, watch as host Matthew Kang teaches an Eater reporter what it's all about and how to eat it properly.

One of the most shocking and perhaps controversial dishes in Korean cuisine is live octopus, or san nakji. The dish is popular in Korea, especially in coastal towns and cities where live octopus doesn't have to take a long trip from the ocean to the plate. In seafood markets in Korea, they often display live fish and shellfish so that diners know just how fresh their ingredients are. Here in New York City, K-Town host Matthew Kang joins colleague and Eater NY reporter Stefanie Tuder at Sik Gaek, one of the few restaurants in town that specialize in live octopus. 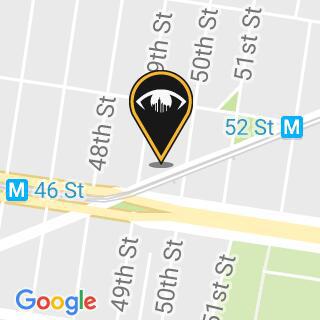 This Korean Restaurant in Woodside, Queens Serves a Dish With Live Octopus

The Greatest Grid, an Interactive Map of the 1811 Master Plan of New York City