You may not have known that the popular word game Scrabble was invented here, in New York City, by a man named Alfred Mosher Butts in 1931.

On Sunday nights during the Depression, Asher Butts would invite friends and family to his apartment to play Criss-Cross Words, a game made of hand-cut tiles — each emblazoned with an individual letter and a number for how many points that letter was worth — that would be arranged by players into words. Over the course of these weekend gatherings, Butts perfected the gameplay and design.

From his Jackson Heights, Queens apartment and the nearby Methodist church on the corner of 81st Street and 31st Avenue, locals would play games over the years, gaining in popularity, eventually becoming a world-famous sensation. Sometime in the 1940s, a rogue street sign went up on that corner, spelling out "35th Avenue" as if written in Scrabble tiles: 35T1H4 A1V4E1N1U1E1.

The sign has disappeared and reappeared a few times over the decades, but has since been officially adopted to commemorate the invention of the game, and you can see it currently mounted on the street like any other sign. 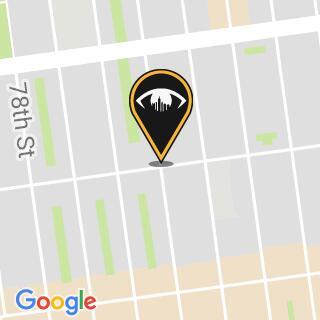 Tune in New York: a Fantastic Vignette of the Sounds and Sights of New York City Streets