The first exhibition of its kind, Art AIDS America opened on July 13 at the Bronx Museum of the Arts showcasing a stunning, sobering, and sweeping retrospective of AIDS related art since 1981. The exhibit is loosely divided into categories such as “body,” “soul,” and “activism,” but each work captures a complex combination of the hope, devastation, trauma, and stigma of the early AIDS epidemic and its persistent presence. As a traveling exhibit, it was previously shown in Washington and will move to Chicago in September—its purpose, in so doing, is to reignite conversations around AIDS/HIV by highlighting the stunted and stigmatized suffering and presence of AIDS that persists today.

Nearly every work in the exhibition is haunting in its chronicling of a culture of loss, and many works are visually uncompromising in their presentation of the AIDS-inflicted body suffering and dying. In images and photographs throughout the exhibit, bodies suffering from wasting syndrome were sometimes presented within classic and contemporary art forms, such as Patrick Webb’s The Lamentation and By Pucinello’s Bed (1992), depicted and framed in the form of an 18th Century tragedy, and Joey Terrill’s Still Life With Forget-Me-Nots and One Week’s Dose of Truvada (2012), a contemporary collage of domestic still-life and AIDS medication.

Other works chronicled loss directly—through graphic photography, for example, and many others referenced loss through tracing the absence of bodies, such as Daniel Goldstein’s Icarian I Incline, a stretched cover from a workout bench imprinted by countless bodies in San Francisco’s Castro District, and Shimon Attie's Untitled Memory (1998), a photographic imprint of a deceased friend on a present space.

The exhibition is a challenging but critical intervention for its open and direct address of an epidemic that has been marginalized and oppressed by institutions, cultures, and politics. The first and last “image” one sees is the chalkboard hanging above the café register, Willie Cole’s How Do You Spell America? #2 (1993)—an acronymic work that reads “AMERICA” as containing condescending or oppressing headline-like narratives. But it might be works like Sue Coe's painting, Kaposi's Sarcoma (1993) that capture the mission at the heart of the exhibit's political mission by challenging its viewers to witness the suffering with compassion.

As I departed from what was a display of contemporary and often hidden suffering, I felt that this is precisely the sort of art exhibition that disturbs in the most necessary ways.

On exhibit now, as well, is a small-scale exhibition entitled “CAZA” that explores the place and role of art in the domestic sphere—caza, here, translates as searching and puns on casa—home. And you won’t want to miss Frank Gimpaya’s series of black-and-white photographs of masked faces on display in a side hallway, an exploration of the interplay between personas and beauty.

All three exhibitions are open through September 25th. The Bronx Museum of the Arts is a free museum and is located off of the Grand Concourse (a short walk from Yankee Stadium). If you’ve never been, it is worth spending a few hours and exploring this quiet and unfrequented art space. 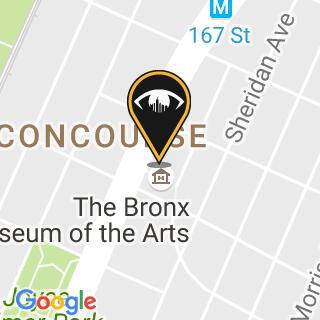 Bronx Museum of the Arts

Visit Edvard Munch's Painting "The Scream" at the Neue Galerie, in NYC Until June

Art In The Open: New Exhibit at the Museum of the City of New York Celebrates Public Art

Video: You Can Now Join the Starfleet Academy at NYC's Intrepid Sea, Air and Space Museum