While 2 Bros Pizza is certainly not the best pizza in New York City, it is the best $1 slice you can find. The main reason for that is that the restaurant focuses on volume to make money. While serving up a tasty slice at a low-profit-margin $1 price tag, they ensure that people will always come in for a quick slice. Because they sell slices almost faster than they can make a pie, each slice is fresh and hot, making the quality much better than a lower-volume place that reheats their older slices.

If you are interested in how the popular slice joint came to be on St. Mark's Place and throughout New York City, check out this interesting origin video in an episode of the Street Food Legends series from our friends at Munchies.

Eli and Oren Halali, the two brothers who founded 2 Bros Pizza, sell slices for a buck. They're known for getting their patrons in and out of the store within ten seconds, and for selling hundreds of pies a day. And they're certainly not the only people in the dollar-slice game in New York City.

Ever since the Great Recession in 2008, dollar-slice spots started popping up all over Manhattan because people were in desperate need of a quick and cheap food option. Now there are more than 80 dollar-slice spots on the streets of New York. People gravitate to dollar slice because it's quick, easy, cheap, filling—and the slices themselves are pretty damn good considering the price.

But, according to pizza historian Scott Wiener, dollar slices may be on the way out...so get them while you can! 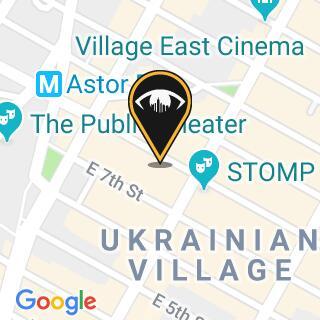