Here is a great vintage shot looking down upon a Columbus Circle that is very different from how it looks today. There is no Time Warner Center, no Trump International Hotel and Tower, no Huntington Hartford Gallery of Modern Art.

It appears the photo was snapped from the rooftop of 240 Central Park South, on the South East of the circle.

Plans to build on Columbus Circle required demolition of 1819 Broadway, a tower of offices that would be “the tallest building ever to come down anywhere in the world,” according to H. B. Mack, president of Wreckers and Excavators Inc. The demolition, which displaced pigeons and others, was to make space for the New York Coliseum, a convention center that stood there from 1956 till 2000, when the Time Warner Center moved in.

This photo originally appeared in the New York Times on June 21st, 1954. 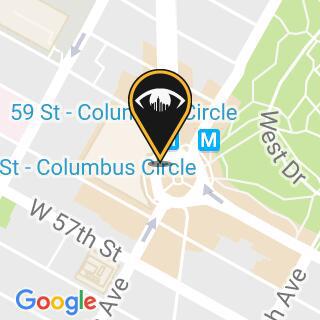 Deli Man, a Documentary About the Owners That Keep Jewish Delis Alive