The U.S. National Archives and Records Administration has a great digital collection titled American Cities which "depicts the city, its development, and its people and their way of life from the early 19th century to recent times." This photograph from the American Cities series (archive #541891) features the Eighth Avenue trolley sharing the street with pedestrians, a horse-drawn produce wagon, and an open automobile back in 1904.

It is difficult to tell exactly where downtown this photo was taken, but with the layout of the streets, it appears it could be where Abingdon Square Park is today, in Greenwich Village. Here is a Google Street View of this area today. 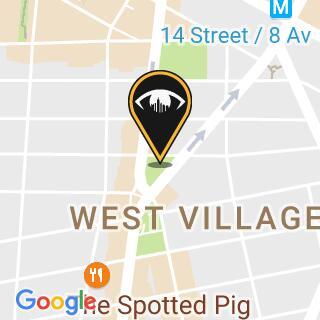 Vintage Photograph Shows Hotels and Carriages Along Fifth Avenue Circa 1908