When asked about a prison in the East River, any New Yorker will proudly tell you the answer Rikers, but did you know there is another one less than a mile away?

Floating off the coast of Hunt's Point in the Bronx is a massive prison barge, right next to the new Fulton Fish market.

The Vernon C. Bain Correctional Center is a 47,000-ton, five-story barge with 800 beds spread over 16 "dormitories" and 100 proper jail cells. At 625 feet in length and 125 feet wide, it also holds a gym, a basketball court, a library, three chapels, a rooftop exercise area, an IMAX theater and a casino. Okay, it doesn't really have an IMAX theater and a casino but I wanted to see if you were paying attention.

So why is it here? According to a 1992 New York Times article:

Under the administration of Mayor Edward I. Koch, the city in the 1980's adopted the policy of maritime cells as a way of trying to develop prison space more quickly and to avoid complaints from community groups about building jails in densely populated neighborhoods.

Check out the full article on Core77 for more photos and history of Vernon C. Bain Correctional Center prison barge. 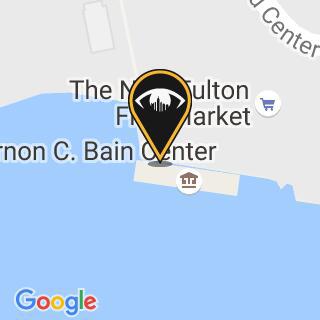 NYPD Has a Crime Heat Map Complete With Filters and Stats