Situated in Gravesend Bay, tucked behind Coney Island, Brooklyn's Calvert Vaux Park is one of the most unique parks in the City.

Named after designer Calvert Vaux, one of the designers of Central Park and dozens of other parks around the City, the park was not actually designed by its titular designer, rather exists as a tribute to him.

The park is built atop of sand, mud and rocks that were excavated from New York Harbor when building the Verrazano Narrows Bridge in 1959, and features walking paths, sports fields, green spans, and perhaps the most interesting, a collection of abandoned boats and structures just off the coast. Several decaying and rotted old wooden and fiberglass ships sit on the periphery, giving the park a spooky, haunted feel.

Check out Calvert Vaux Park from all angles in this short video from our Above New York series. 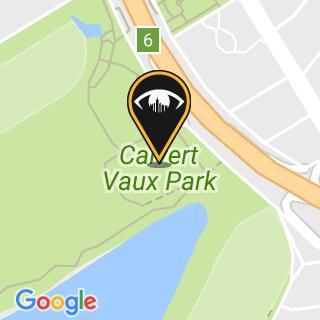