Hidden deep in the basement of the 1929 Art Deco Wyndham New Yorker Hotel, there is a secret tunnel that leads directly to Penn Station. The tunnel originally allowed guests of the hotel to directly enter and exit the hotel through the tunnel and gave them easy and direct access to the Subway.

There is still over 120 feet of tunnel here in the original Art Deco style. The design of the hallway also takes inspiration from Mayan culture, with some of the wall tiles contain Mayan symbols. The New Yorker Hotel is filled to the brim with history, something that both Kinney and the establishment hope to make more popular.

The tunnel was closed in the late 1960s and is now being used as storage. Check out the full article on Untapped Cities for more history on the secret tunnel. 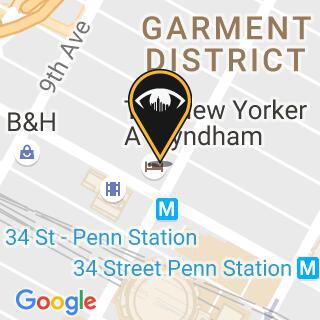 The New Yorker A Wyndham Hotel

Veronika is in her twenties and is studying marketing and design. She loves to travel, discover the world and its delicious foods, and finds inspiration in the City’s arts scene. She never turns down a challenge, especially on the volleyball court.

Check Out This Great History Channel Documentary "Cities of the Underworld: New York"

Exploring a Lost and Rediscovered Subway Tunnel in Brooklyn

The Secret Chinatown Most New Yorkers Don't Know About