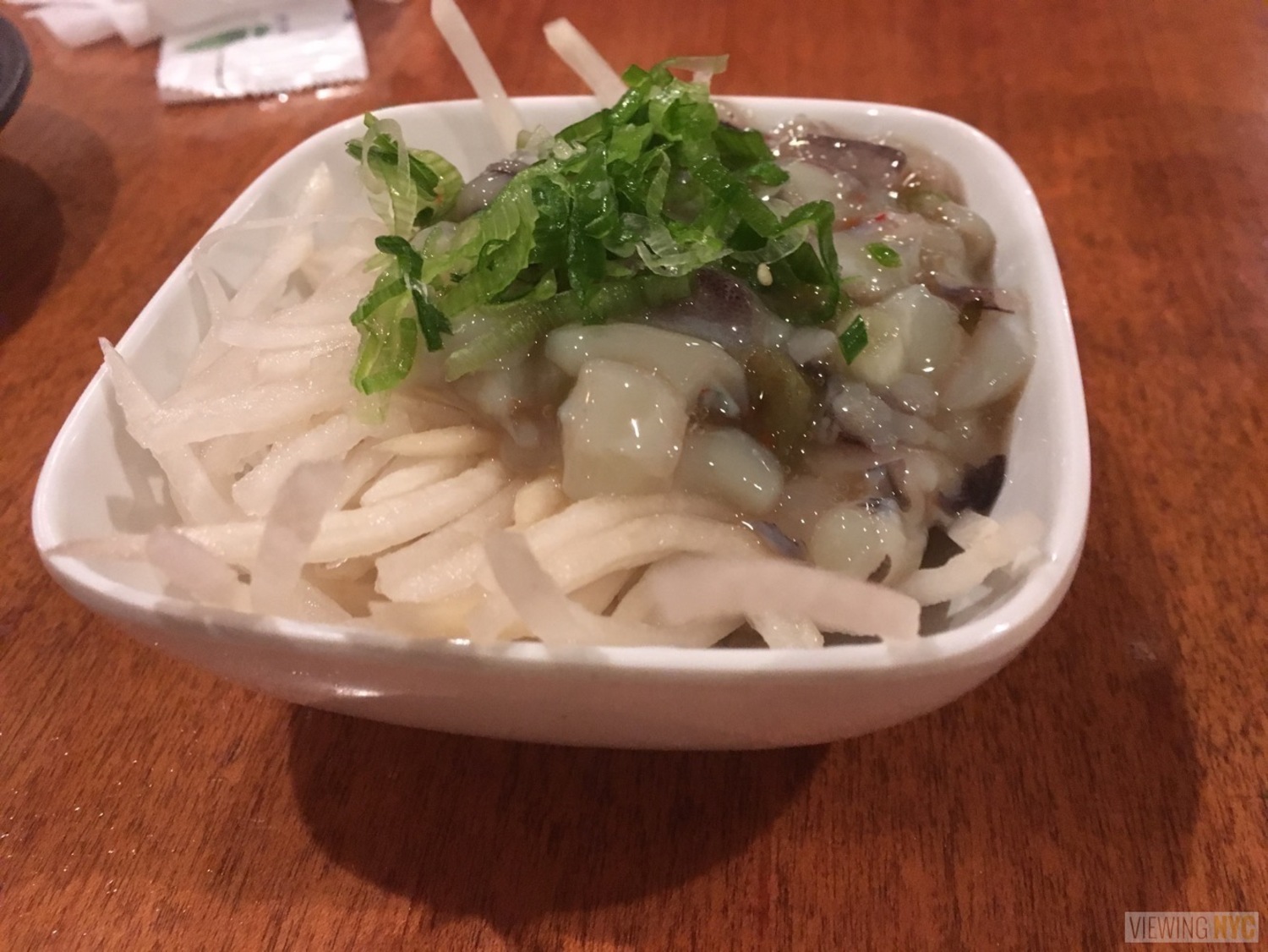 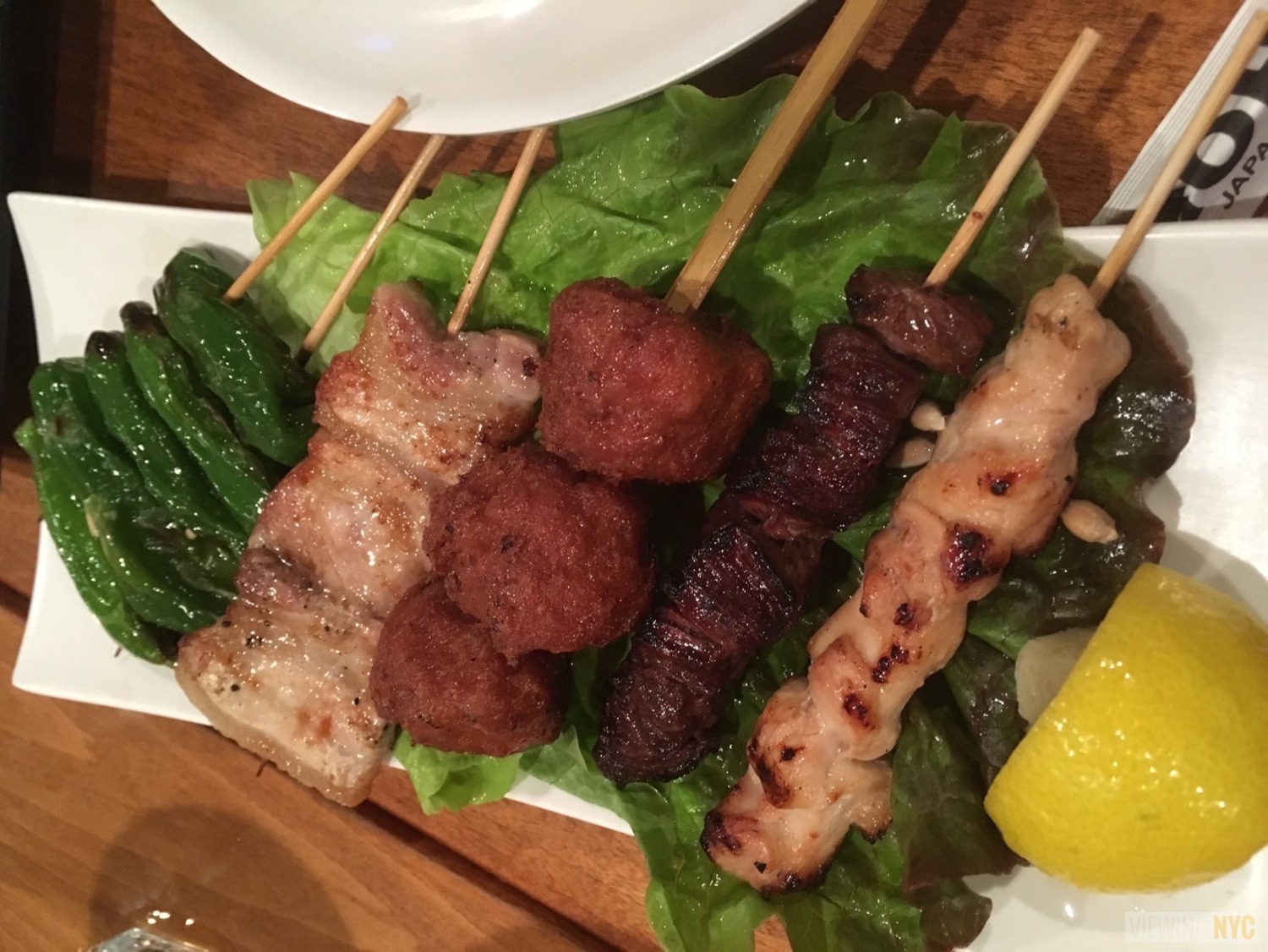 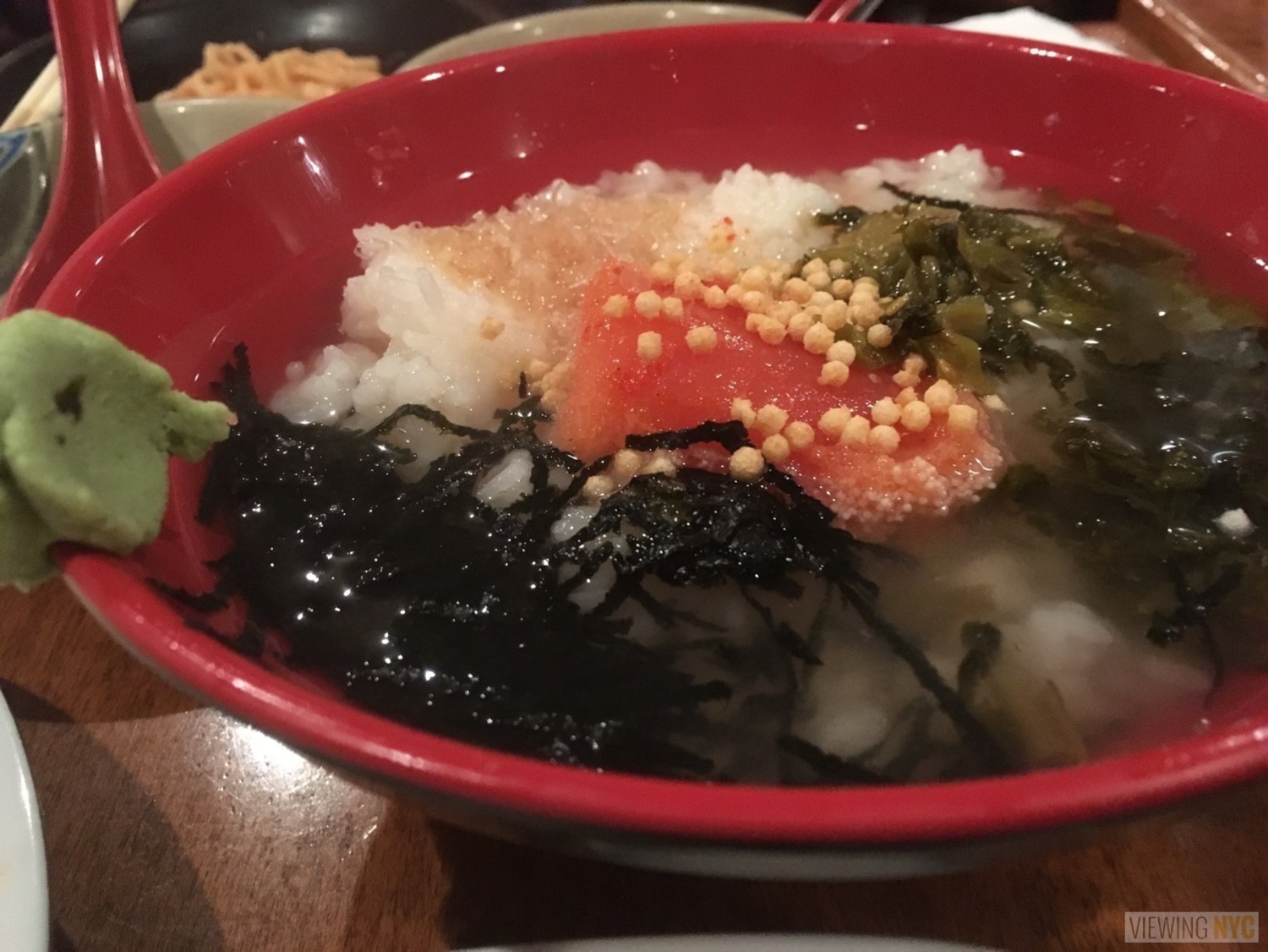 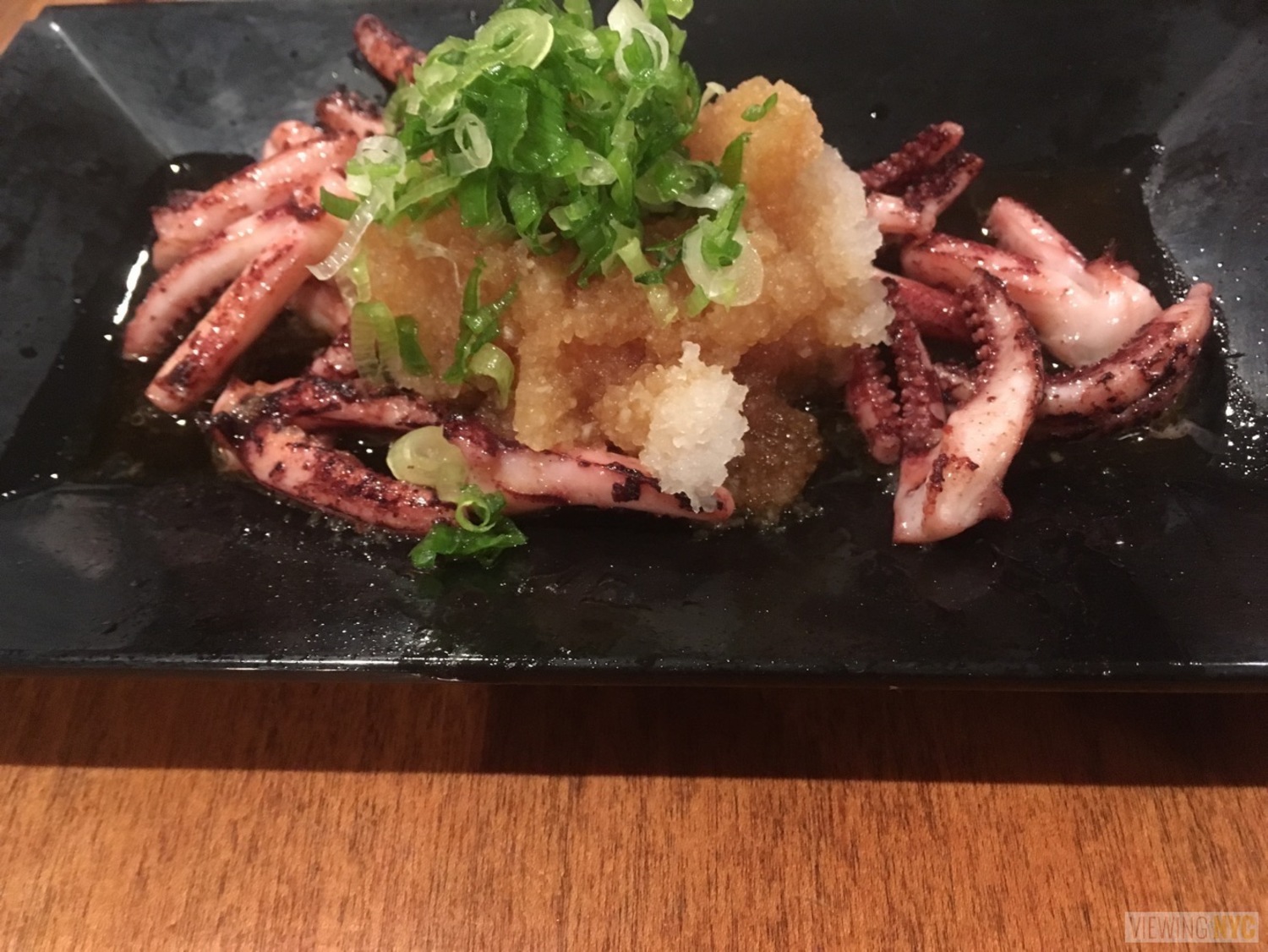 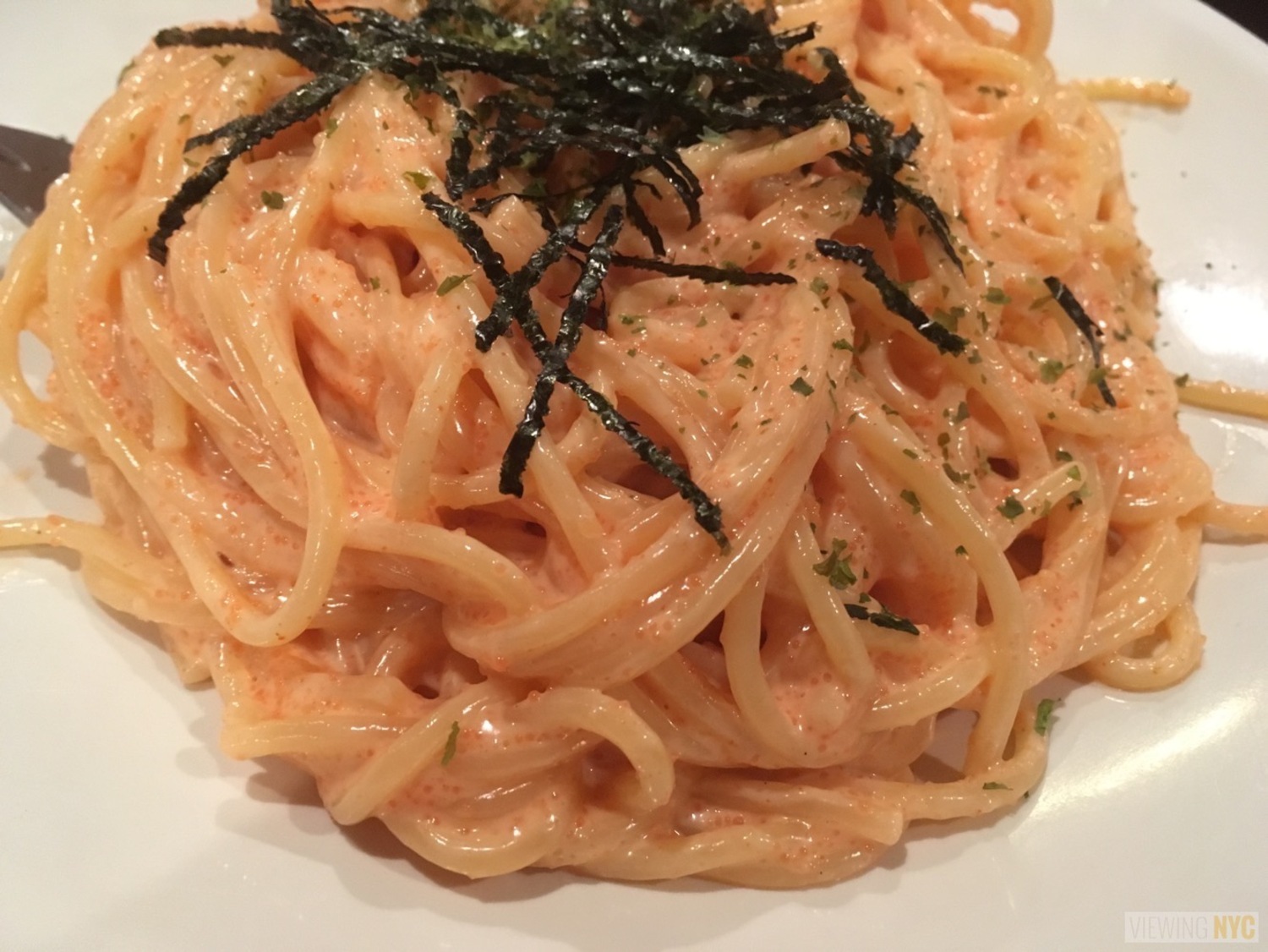 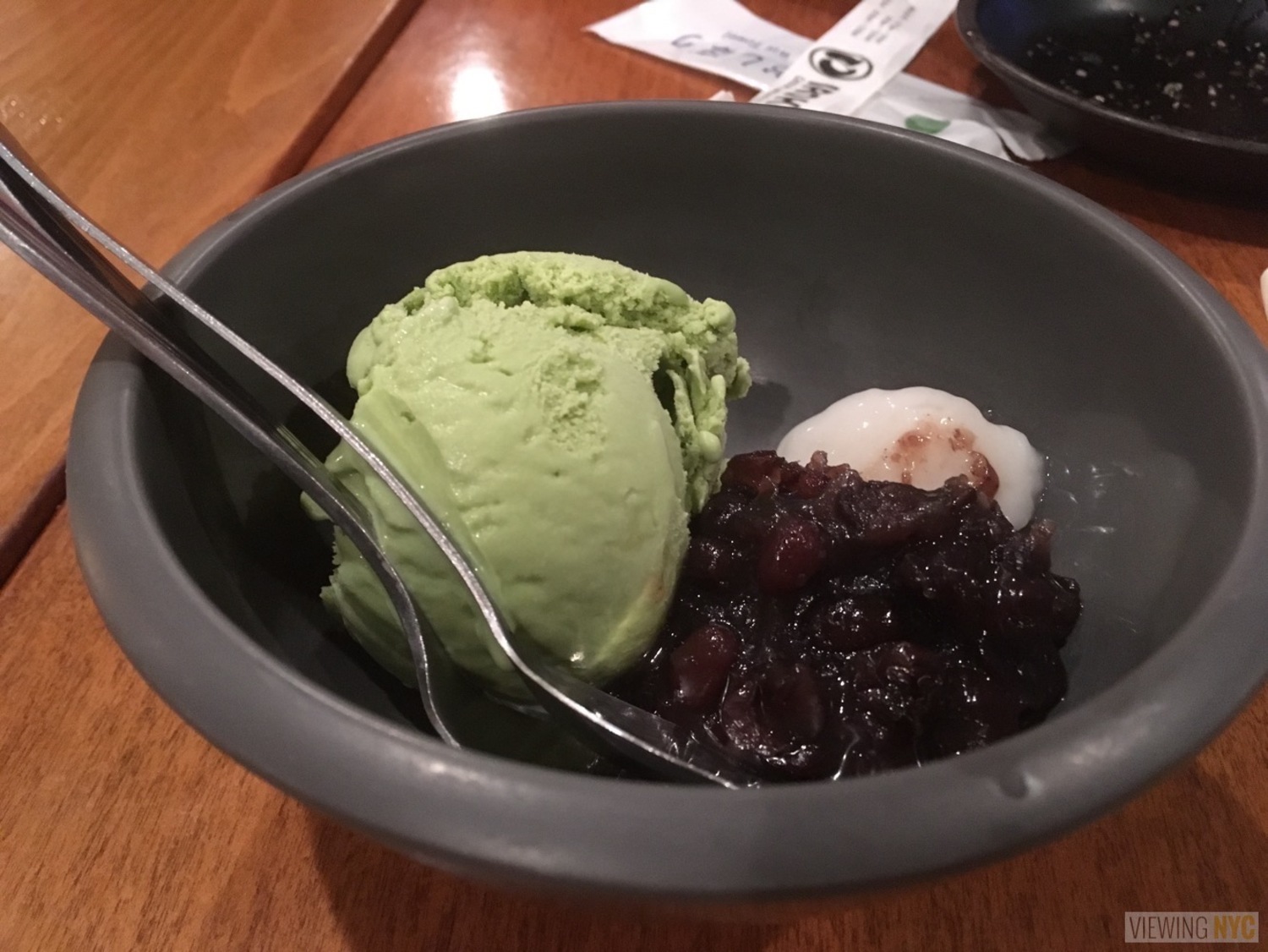 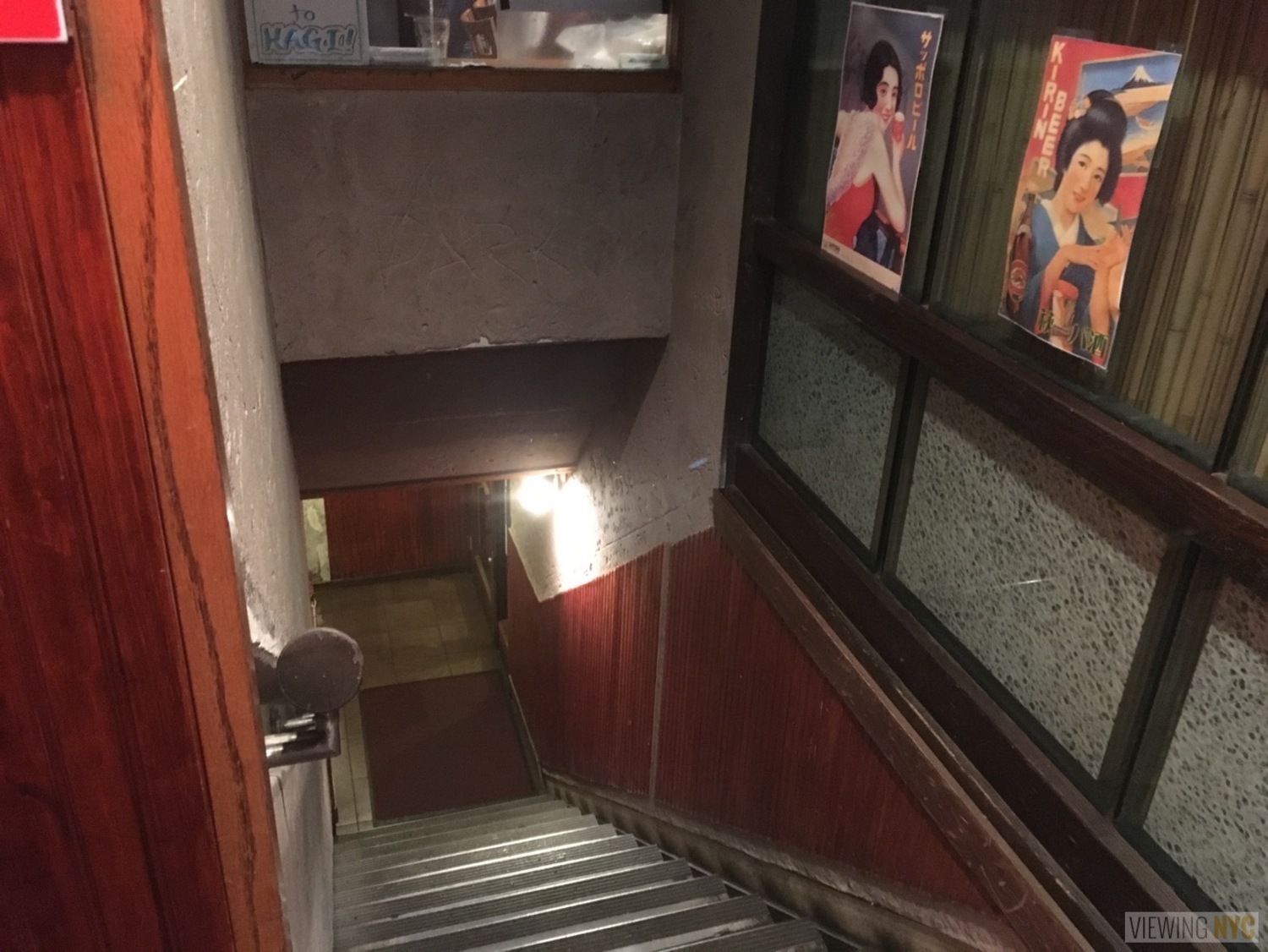 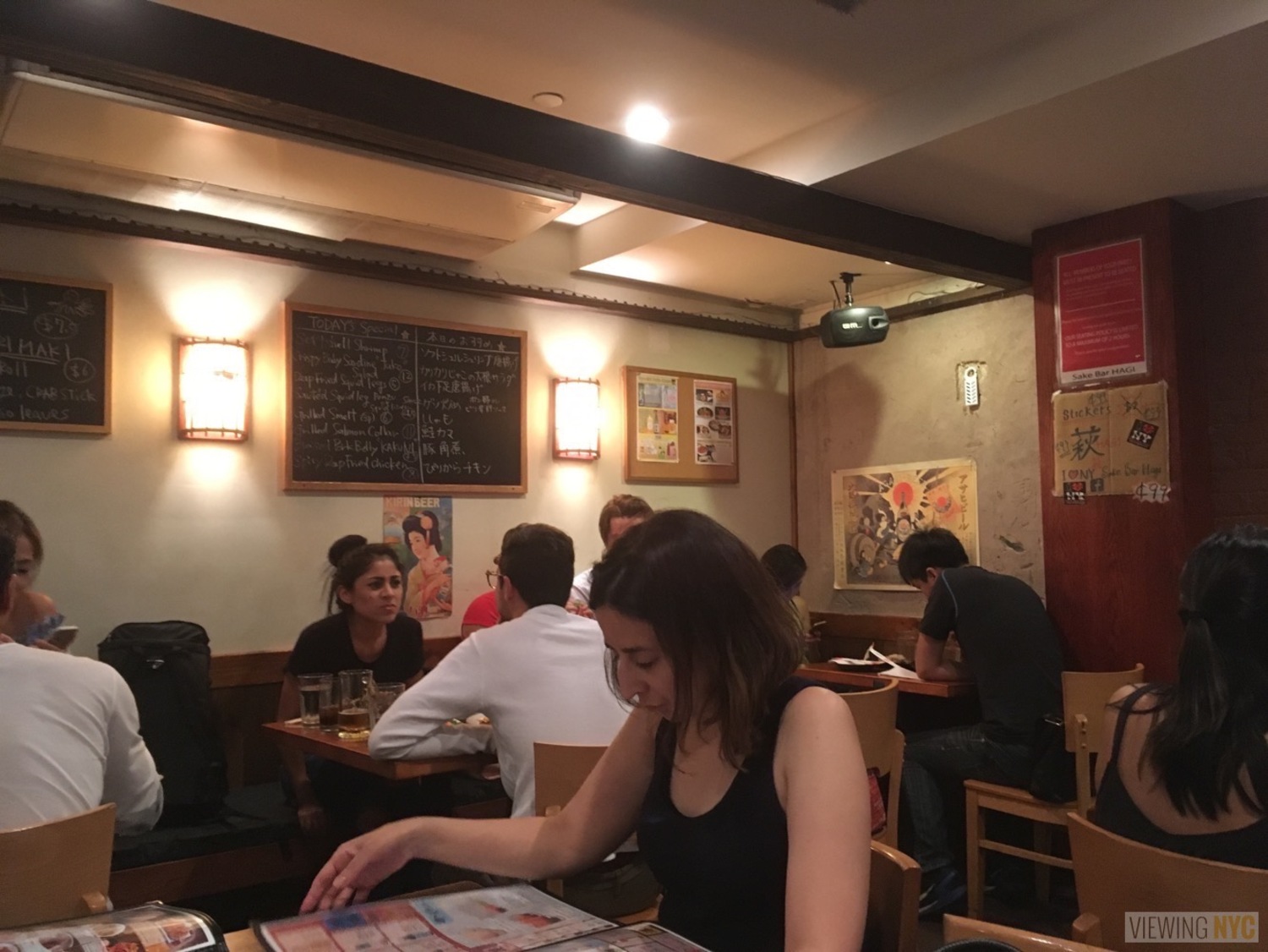 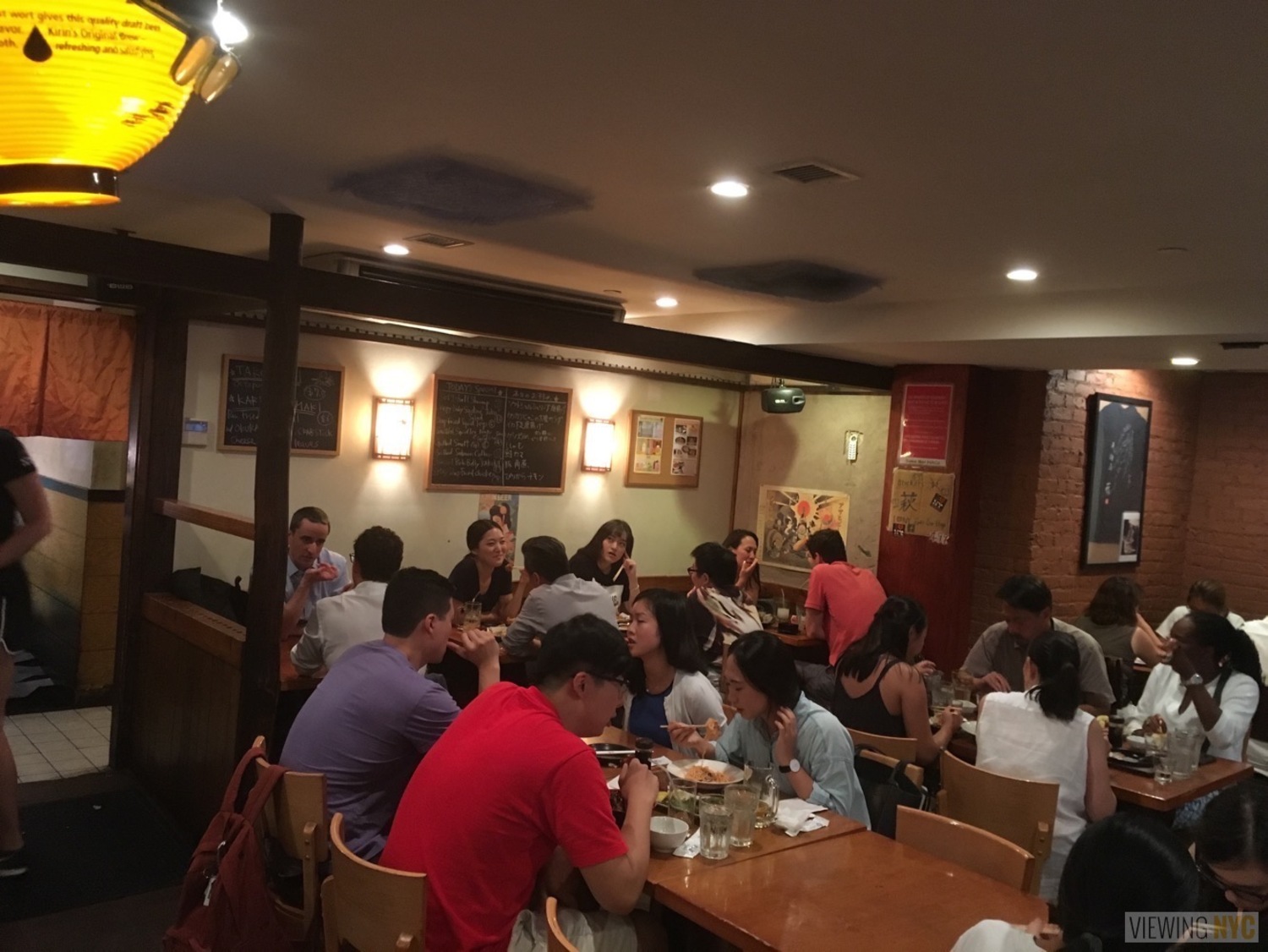 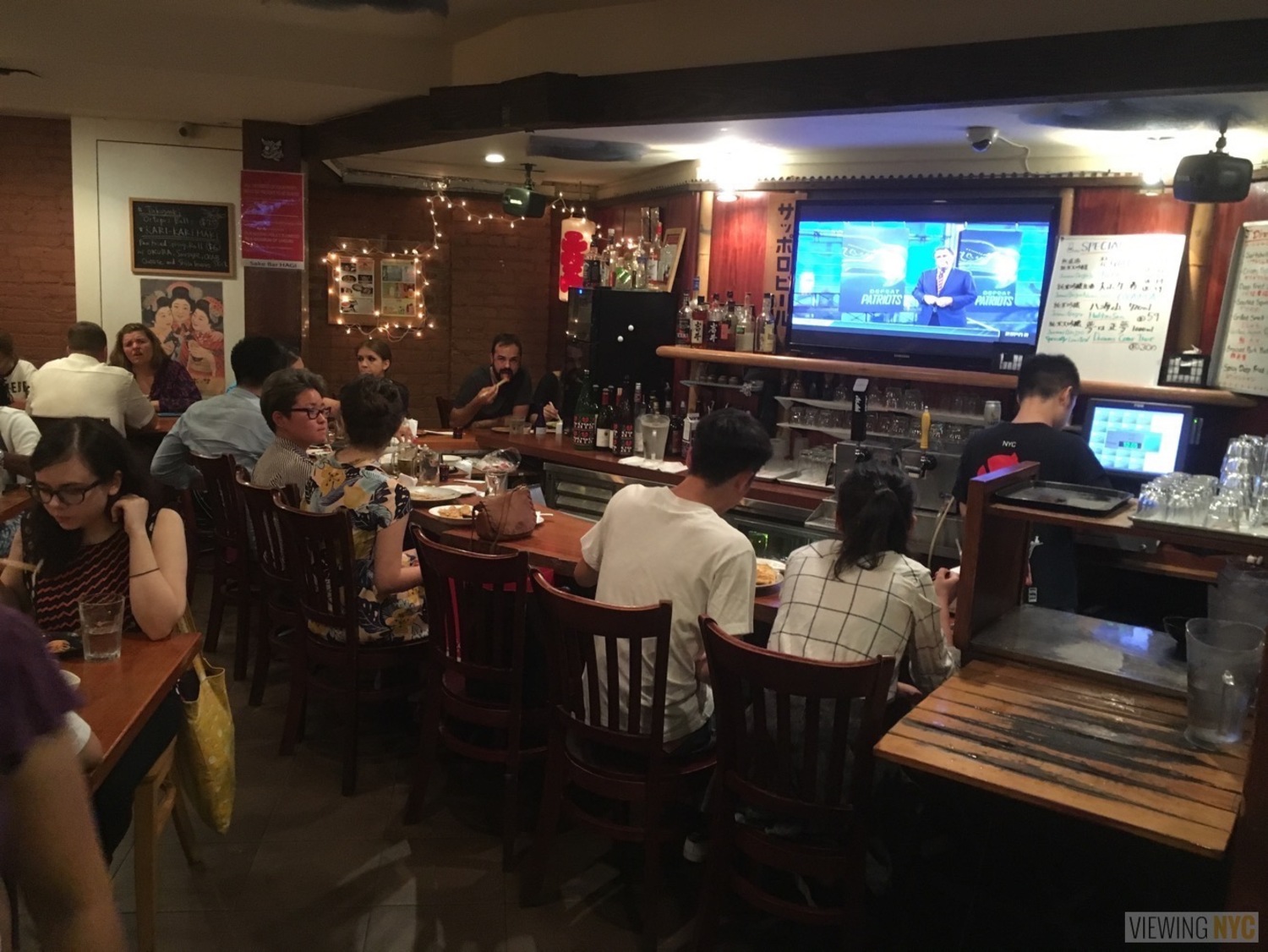 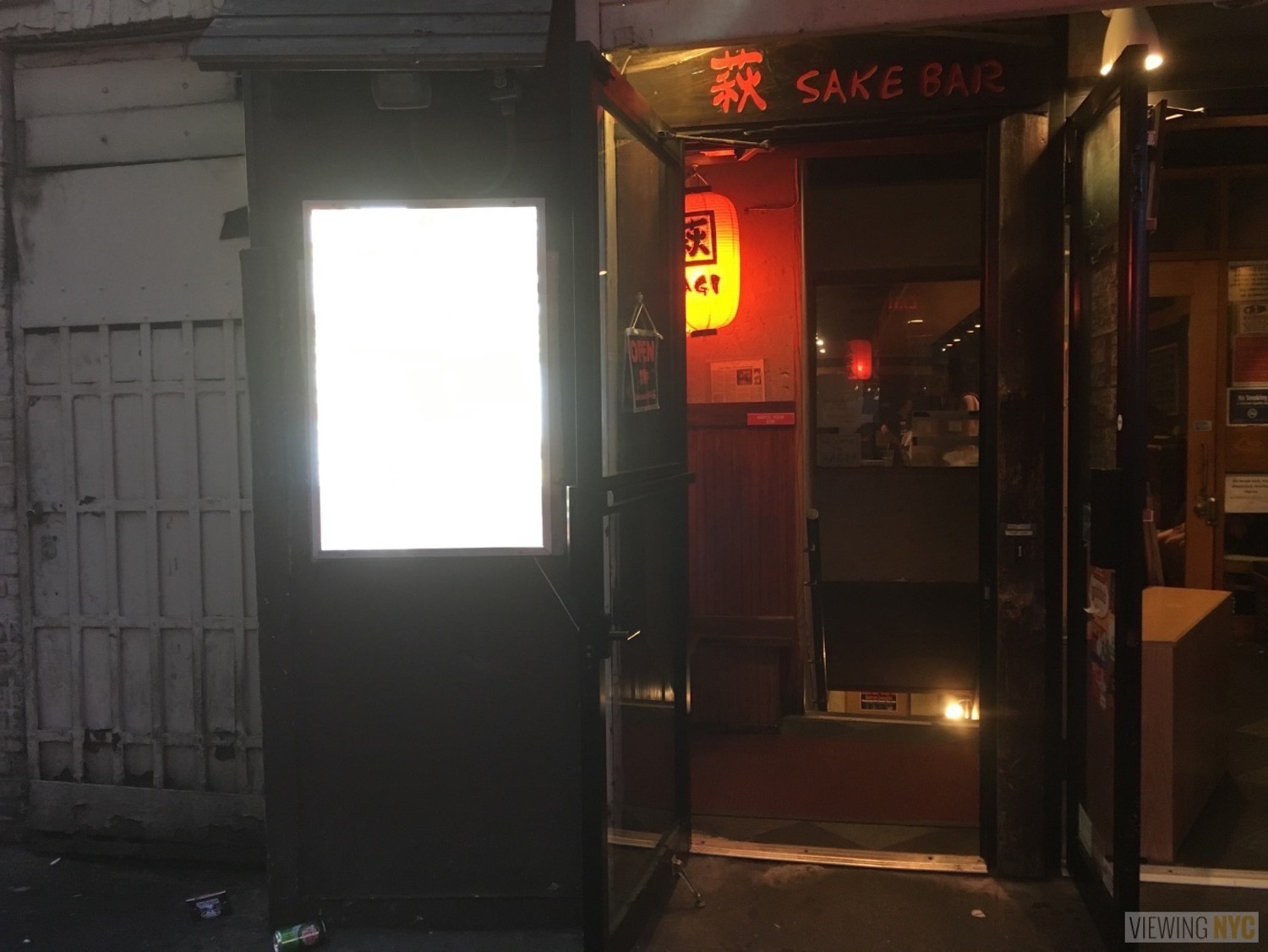 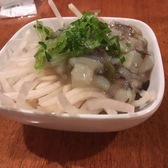 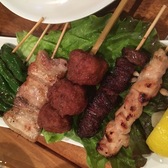 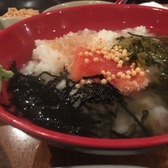 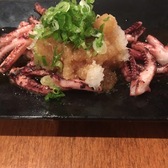 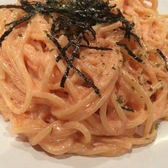 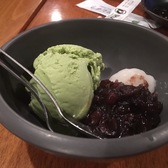 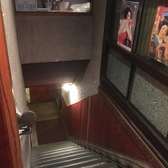 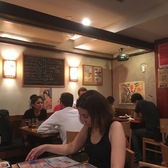 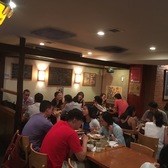 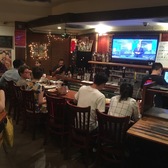 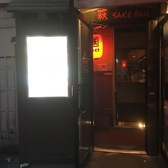 All photos via Bessie Chu for Viewing NYC

Hidden in the depths of Times Square, Sake Bar Hagi serves up Japanese-style comfort bar food and drinks. The entrance itself is plain and possibly mildly sketchy-looking with just a mysterious stairway down. Once you walk down, it's neat but packed Izakaya, or a Japanese style beer pub that's akin to an Irish pub.

Izakayas aren't your fancy Nobus, Ootoyas, or other upscale Japanese restaurants in the city, but they aren't anything like the teriyaki and sushi type places either. In Japanese cities, they're typically down-to-earth places serve a variety of small inexpensive dishes with plenty of booze, the kinds of places where people go after work by to blow off some steam, get a good meal, and knock back a few.

Sake Bar Hagi is an oasis in an area of town ceded to mass market chains and stuffy corporate happy hours. Once the purview of Japanese businesspeople, it's become an after work favorite of all types of locals. The cramped and busy space does feel like it could be someplace in Tokyo, but definitely is grounded with a New York feel with plentiful screens tuned into ESPN and tough no-nonsense waitresses.

The dishes that Sake Bar Hagi excel at are the Japanese equivalent of gastropub meals. Yakitori, grilled meat or veggie skewers, is recommended. The octopus or squid are definitely winners here as well if that's your thing. The mentai pasta, creamy spicy pasta with cod and roe, might be an acquired taste for some. To me, it definitely tastes like something you'd want on a cold evening after a tough day and is my personal favorite here. There are also the usual dishes such as spicy tuna rolls, but this place is definitely catering to a Japanese palate. The green tea, red bean, and mochi dessert tastes similar ones I've had in Japan and are a great way to finish a meal.

Again, this isn't the dining experience you'd find at more upmarket Japanese restaurants. It's more like stopping by a local bar after work and grabbing a beer and burger. Speaking of beer, they also have a good selection of Japanese beer. My personal favorite is Orion from Okinawa, which they stock here. Of course, they also have a wide selection of sake, which changes seasonally.

Pro-tip: If you plan to go in the evening, go early. There's typically a decent sized line after six huddled in the doorway. Go with a small group to maximize sharing dishes. This place hits the spot for a homey meal, won't break the bank, is a great vibe after work, and a nice bit of the more everyday culture from Japan compared to all the extravagant to sometimes gimmicky Japanese dining found around town. 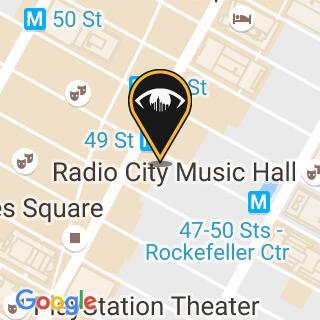