Aerial view of the long abandoned structures, consisting of three concrete towers with observation decks at the top, and the Tent of Tomorrow, once covered with the largest cable suspension roof in the world. They were built as an attraction for the 1964-1965 World's Fair held in Flushing Meadows-Corona Park, along with numerous other new structures, including the Hall of Science, the Unisphere, and Shea Stadium. They were subsequently left to rot after the fair, and closed operations permanently. Currently it looks as though there is some restoration/maintenance work going on at the bottom, but as of right now, the future remains uncertain. For anyone wondering, the stairs that take you up to the top of the towers are in very poor condition, covered in rust, with certain sections on the verge of detaching. The door to the stairs is also generally kept locked 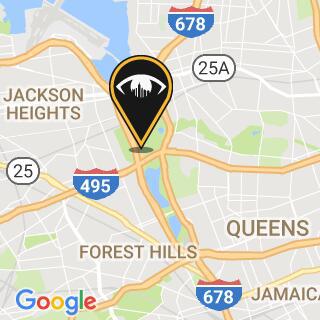