Located in the Flushing Meadows–Corona Park, the New York State Pavilion was built for the 1964-1965 New York World's Fair. Despite being repurposed briefly after the fair, it has sat unused for decades.

Drivers familiar with the L.I.E. are so accustomed to the sight of the New York State Pavilion in Flushing that the otherworldly oddity of its towering saucers and elliptical circus tent barely registers. It's an ingrained part of the Queens skyline, a landmark New Yorkers recognize and hold dear, but rarely access. How many times have you driven by it? How many hours have you been stuck in traffic with nothing else to stare at? Have you ever been up close? Have you ever been inside? For most of us, the answer is probably no.

You can check out the New York State Pavilion as part of this year's Open House New York, on October 15th and 16th. 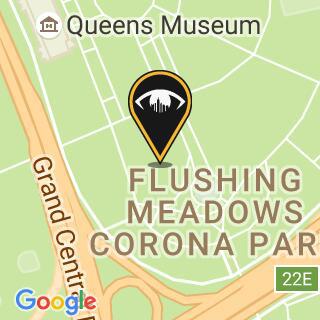 Welcome To The 21st Century: The NY State Pavilion Gets a Makeover