The Scenic Spiral Wheel was a unique roller coaster installed in Coney Island's Luna Park back in 1917.

It was a 45 ton, 70 foot diameter steel wheel that was tipped towards its heavier side where it rested on its bottom edge. Roller coaster track spiraled around its outer rim from its top to its bottom. As the four car train circled the rim of the wheel, its weight changed the wheel's tilt so that the entire rig gyrated around like a top running low on spin. The train slowly spiraled down and covered 3200 feet of track in two and one half minutes. A second train with a separate admission climbed up to the top of the wheel, then descended through a long tunnel.

Apparently, the ride was not as exiting to ride as it was to watch, so it was shut down in 1921 after only 4 years. 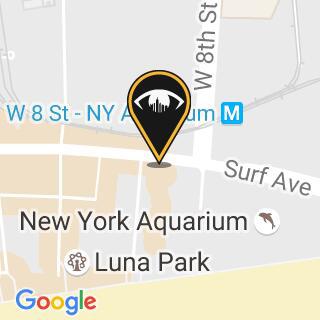