Yom Kippur is the most important Jewish holiday of the year. It is customary to fast for 25 hours over the duration of the holiday, a tradition that goes back thousands of years.

In places of dense Jewish settlement like the turn-of-the-century Lower East Side, most restaurants would close down on Yom Kippur to observe the holiday, and to avoid tempting people with the smell of food or opportunity to dine.

In 1898 however, a small cafe at Canal St and Division St named Herrick’s decided to stay open, resulting in an angry mob of thousands of protesters storming the store and rioting in the streets.

Many offenders were chased down the street for fear of their lives. Eventually, the angry protesters even managed to storm the restaurant again where they “overturned tables, smashed dishes and threw crockery at the proprietors.” One diner was doused in hot tea. Another diner, with his three friends, happened to be military and ‘fired off a revolver to attract police’, scattered the crowd in fear. Police did arrive, with clubs drawn.

Check out the full writeup for more on the Yom Kippur riots of 1898. 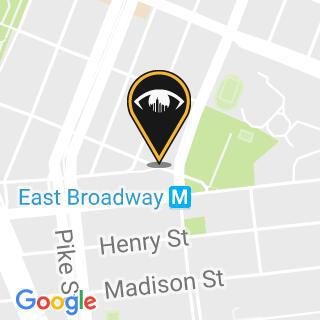 Discover the Secret Jewish Past of Harlem

Street Shofar: This is How We Do Yom Kippur in New York City