Whether or not you have seen 1955's The Seven Year Itch, you most likely are familiar with the iconic Marilyn Monroe scene that was in the Hollywood classic.

The scene is perhaps the most well-known Marilyn Monroe scene that she ever filmed, and it was captured right here in Midtown Manhattan, on the southwest corner of 52nd Street and Lexington Avenue.

Hundreds of spectators came out to watch filming on September 15th, 1954 at about 1am. The director reportedly shot the scene 14 times to get it right, and each time the crowd (mostly male) would cheer loudly whenever the skirt was blown up by the wind, nearly ruining the shot.

The updraft from the subway grate isn't normally strong enough to blow up a dress of that size and is unpredictable for a film shoot, so large fans were placed below that could blow up wind on demand for the shoot.

The block has changed drastically over the years, and while the actual metal grates have been replaced, the subway ventilation shafts remains the same.

There are no signs of any sort on the location to commemorate the piece of movie history that was made here. Most people walk right over the grates without a clue of its cultural significance. 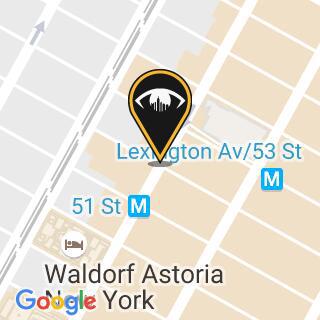