The team at Budget Direct recently created a clever series showing the same location across four different seasons in a single photograph. One of the locations captured was of the beautiful Bethesda Fountain and Terrace in Central Park. Check it out!

You may think of New York as back-to-back buildings and hustle, and that’s certainly part of the appeal for New Yorkers and visitors alike. But little oases of calm offer a moment to catch your breath and appreciate the transience of daily life and the seasons. The ‘heart of Central Park,’ Bethesda Terrace is just that oasis: “Nature first, second, and third,” was how its designer, Calvert Vaux, described his priorities for the space in the 1860s: “architecture after a while.” Inside, Jacob Wrey Mould’s arcade is church-like, clad in 15,000 colourful, patterned encaustic tiles, and features carvings that represent the four seasons – whose real-life effect in the nature of Central Park is to cover the full spectrum of colour as the months pass. 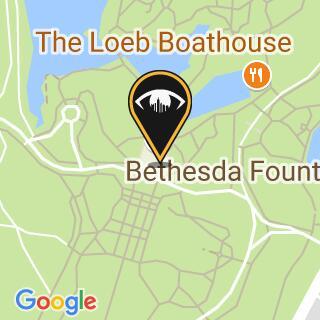