In a new series titled Islands of the Undesirables on collaborative historical website Atlas Obscura, historian and journalist Bess Lovejoy highlights five of the New York islands where we have stored our sick, criminals and unwanted residents.

Yesterday, part 1 of the series covered Roosevelt Island, and today, the second part in the series explores the history of Randalls and Wards Island.

Ward Island (its name comes from former owners Jaspar and Bartholomew Ward) was used for burial of hundreds of thousands of bodies relocated from the Madison Square Park and Bryant Park potters fields, beginning in the 1840s. Overall, 100,000 bodies were moved to approximately 75 acres on the southern tip of Wards Island. (It’s unclear whether the bodies are still there.) Besides the burial of the indigent dead, the island was also the site of a hospital for sick and destitute immigrants, known as The State Emigrant Refuge (the biggest hospital complex in the world during the 1850s). Other tenants included an immigration station, a homeopathic hospital, a rest home for Civil War veterans, an Inebriate Asylum, and The New York City Asylum for the Insane.

The full article is a fascinating short read on the complicated history of the combined islands and their "undesirables." 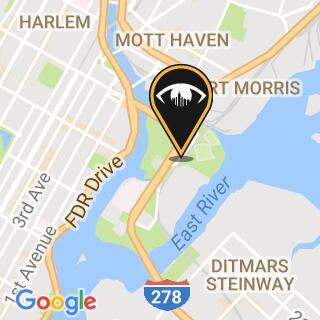