The Brooklyn Heights Promenade sits over the 278 freeway and offers one of the best views in the City. Once a place where wealthy Manhattan business men, lawyers and other prominent figures would settle, Brooklyn Heights is considered by many to be the first suburb in the City. When New York's controversial "master builder" Robert Moses unveiled the massive highway to be built right through the suburb, the neighborhood's wealthy residents set a plan into motion that would still afford fantastic views over the East River to the skyline of Manhattan.

In the mid-1940s Robert Moses wanted to construct a new expressway right through the heart of Brooklyn Heights. He was stopped by the outcry of the Brooklyn Heights Association, and a solution emerged to build a two-tiered highway above the waterfront. The Promenade was constructed in part to insulate the neighborhood from the noise of the Brooklyn Queens Expressway. It opened to the public in October 1950 and has been a magnet for local residents and visitors alike for over half a century.

In this 10-min video, Henrik Krogius, the emmy-award winning editor of the Brooklyn Heights Press offers a history of how the events unfolded, and the major players involved. It is
all included with more detail in his book on the same topic, The Brooklyn Heights Promenade. 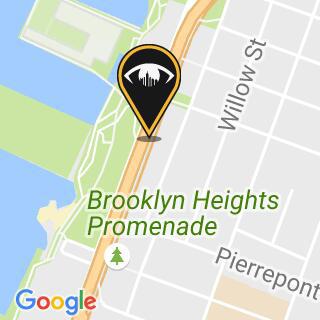 VIDEO: The Story Behind New York City's First Ever Subway Fare Hike in 1948